Ireland's People and Scenery - two of our best assets! 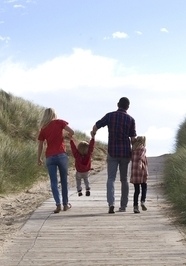 Ireland's people and her scenery - two of our biggest assests according to the latest Visitor Attitudes Survey. We'd better take good care of them then!

Overseas holidaymakers continue to rate Ireland as value for money and our people, scenery and culture remain our strongest assets – this is according to top line figures from the latest Visitor Attitudes Survey. The views of more than 1,500 overseas visitors to Ireland throughout 2013 were surveyed as part of the research. Minister for Transport and Tourism Leo Varadkar TD has said the findings will inform tourism development for the next few years.

According to the survey’s top line results:

Those whose holiday exceeded their expectations cited a number of reasons for this, including:

Finally, there was an interesting spike in the proportion of overseas holidaymakers who mentioned word of mouth as an influence to choose Ireland to visit last year (from 28% in 2012 to 36% in 2013).

“A recovery in both profitability and employment in the tourism sector is now quite evident and the prospects for the year ahead are really strong. The tourism industry has played, over the last year, a significant role in Ireland’s economic recovery. As the sector continues to shift from the domestic market to a greater focus on more lucrative high value overseas visitors, it will bolster its contribution to the country’s overall recovery.”